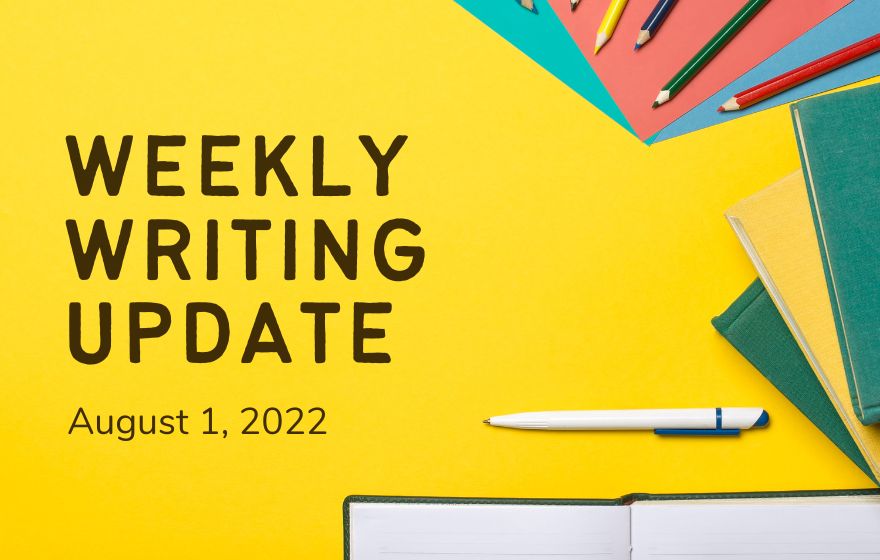 Last week, I wrote about how disappointing July has been from a word count perspective, but how the time away from the keyboard served my characters well. This week, I managed to reach my word count goals…until things broke.

We’ve all been there, and while it happens far less often than it once did, catastrophic computer failure bites all of us at some point. And I did it to myself if I’m honest. For most of my MFA program (and the ten years before), I saved my work in Dropbox and Google Drive. Everything was backed up to the cloud and then saved locally on each of my devices (just in case). But when Good Game reached completed draft status and there were 50+ chapters to keep track of, I started having a heck of a time in Google Drive. My tactic to save each chapter as an individual file meant opening dozens of tabs at a time when I needed to rework a component that impacted different parts of the book. And when I tried to load it all into a single document, it would take several minutes to boot up and get choppy as I scrolled.

So I switched to Scrivener, and it solves all of these problems. I can quickly flip between chapters. I can make notes on individual scenes. I can link different scenes to one another if they are dependent. It’s great.

But it saves all of your files locally. I should clarify that this isn’t the horror story it’s starting to sound like. I only lost two days’ worth of work, but two days’ worth of work in a productive week is still 3,000 words. Losing 10% of a WIP isn’t the end of the world, but it can also severely cut into motivation, which is what happened toward the tail end of the week. I shifted gears, worked on a short story revision instead, and am slightly behind my original pace.

There are positive notes to be had, of course. Almost nothing I’m writing right now will be in the final novel. Based on what happened to Good Game and the quality of what I’m writing right now, the vast majority of this new project will be rewritten, but that comes later. Having to rewrite it now when I’d rather be working on the next scene is deflating. It feels like busy work rather than creative work, and I hate busy work. But, it’s also an opportunity to polish ideas, rethink the direction in which characters were about to go, and ensure the link between those two scenes is as strong as possible. I wrote most of what I lost again yesterday, and it works better. It’s still not going to be in the final draft, but it’s more in line with the voice and direction I’ve been building toward.

I don’t know if there’s a moral here, at least not one you don’t already know. Back up your work, maybe? Make sure to close Scrivener and check iCloud before moving to a different computer and opening the same file? I don’t know. Mostly, I think it’s just that writing is hard, and life will continuously throw obstacles at you. It’s a miracle anything ever gets written, and it feels weird to be fighting against that inertia (and winning?)

Anyway, back to the meandering monstrosity that is this new novel. I will be very excited to start working on the second draft.