How I Tripled My Subscribers in One Week with LinkedIn

For years I’ve been told how amazing LinkedIn is to generate new connections, build working relationships, find new leads, or simply discuss your trade with like minds.

I took it with a grain of salt because, to be honest, you hear that a lot about nearly every social media platform.

Create Tumblrs and your search rank will explode

I tend to believe only with my own eyes, and in the case of LinkedIn I had never seen results. For my clients in particular, we’ve always focused on the fan and follower building exercises that I know (sometimes) work on Facebook and Twitter.

Turns out I was wrong. LinkedIn is a powerful tool and I’ve only just scratched the surface of what I think is possible with it.

Instead of focusing on why I think it is so useful for freelancers, I want to share how I used it to triple how many email subscribers I had in less than a week.

It started on accident. I decided to post something about blogging – about how to be more controversial in your posts without being a jerk.

I then shared it to all of the standard channels and turned my focus to marketing the post. That same week I’d been optimizing my LinkedIn profile, preparing for an ad campaign.

So people were already looking at my profile. Subsequently I got a handful of likes and shares through LinkedIn.

So I decided I’d run with it for a couple days.

But I knew that people on LinkedIn had specific posts they liked to read and share. Most of my connections were either small business owners or freelancers, so I knew blogging topics were probably a safe bet. I did a little more research to see what my connections were liking and sharing too.

I created a list of about eight different types of posts and topics that people on LinkedIn (connected to me) seemed to like and would be willing to share.

Then I started writing.

The post topic was Changing Gears Rapidly as a Writer, followed by a second post, 5 Most Effective Types of Blog Posts.

I wrote both and scheduled them for Monday and Wednesday of that week. They went up, I shared them and I got the usual spike in traffic for new posts.

Then I went on LinkedIn and started sharing that content more actively. I did the following:

That alone wasn’t enough. People share content on LinkedIn near constantly and most of it gets ignored. The first post, Changing Gears Rapidly as a Writer, only got a small spike in traffic.

But I had a couple more ideas:

So I had a grand total of six comments from two people and a handful of likes. Doesn’t sound like much, but then I saw myself jump to the top of the “influencers” bar on the sidebar.

Groups on LinkedIn are active, but rarely with people actually sharing or interacting. Most of the people in them are looking for posts or opportunities to contact people. It’s a social network, sure, but with heavy emphasis on the “network”.

The actual volume of subscribers wasn’t necessarily high, but I tripled what I’d had previously, with LinkedIn traffic converting at a rate of nearly 50% on standard pages (no squeeze pages or popovers).

How to Do the Same

Common social media advice is to provide something of value and focus on relationship building first.

If you work in B2B services, whether as a freelancer or even if you are only a blogger, the key here is to stand out. Relationship building is what creates a strong platform for your company and services on LinkedIn, but raw exposure is a very nice side effect.

How LinkedIn has their groups setup, it’s very easy to be named a top influencer at any given time, and when you are, you’ll see a surge of traffic to your links and profile, all with very little upfront work.

LinkedIn may not be a perfect tool for everyone, but for freelancers, bloggers, and anyone with business clients, it has an extremely high return on investment (in terms of time), one of the reasons I will continue to use it actively for my efforts. 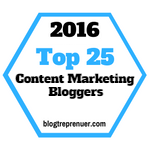